This paper summarizes* the ideas expressed by experts on the particularities offered by the Montreux Convention and the perspectives according to which the Black Sea can become an open sea, a maritime space with unrestricted access.

Sergiu MEDAR – Istanbul Canal in the Competition of the Great Powers

Șerban CIOCULESCU – Istanbul Canal: A “Game-Changer” in the Security Architecture of the Black Sea Region or a (Controversial) Internal Policy Decision of the Erdoğan Regime?

Adriean PÂRLOG – The Security of Turkey, the Blue Homeland and the Black Sea

Translation and adaptation of text: Andreea ADAM and Scott EASTMAN

*The ideas expressed do not represent an official point of view and do not reflect the position of any public institution. 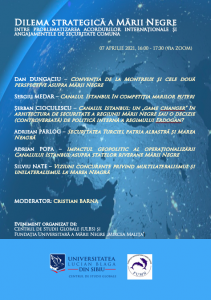